Do you remember the first kiss to knock your socks off? Ruby does. Here’s an unedited sneak peek into RS’s road captain Preacher’s first kiss with Ruby.

You can add it to your TBR here on Goodreads: 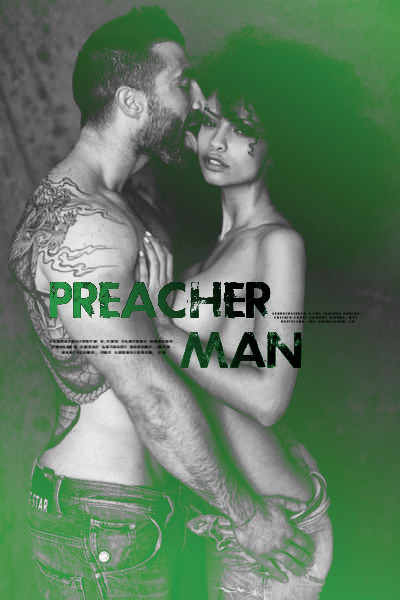 Disclaimer: Picture found on the interwebz and edited.

She all but scowled at him. What in the good hell had that been, shoving her behind him like he expected the big bad ogres to gobble her up? Really? The man was crazy. She’d seen worse than a few drunk men. “I have perfectly good working legs, Preacher man. You all but threw me over your shoulder, frightened I might smile at your buddies? god, forbid. You can relax, I don’t go with bikers.”

His entire body swerved. A mass of muscle towering over her, keeping her locked into the side of the bar. “Is that so, beautiful?” his voice said he was about to prove her wrong. She sighed and waited for it, the glint of his green eyes backed up his unspoken claim.

Why did she keep saying these things, she already pegged he was competitive.

“No, I take it back. I want to do them all. Line them all for me.” she clapped like he was her manservant. Preacher laughed, the noise had the desired effect and tingled between her legs. “I’ll start with the handsome blonde one in the blue T-shirt, he looked like a Hollywood movie star researching a role; When bikers go rogue. A smash hit for 2018.”

He brought his stare to hers. His mouth curved with the hint of a grin. “Pretty-boy will like that if I ever told him, which I’m not.”

“You’re making him forbidden? don’t you know what means to a woman? you did it now, he’s looking mighty good, move out of my way, let me go work my siren song on mister Hollywood.” she joked but he still towered in her path stopping her from moving.

His head came down so they were eye-to-eye.

How could he look like a straight up axe-murderer and an underwear model at the same time? by rights he shouldn’t appeal to her, he wasn’t classically beautiful, his face had white scars, skin tanned from too much sun and he had lines under his eyes like he wasn’t sleeping much, but, Jesus in heaven, he appealed on that primary most obvious level of she was very much attracted to this man.

And that pissed her off.

Bikers were off limits.

Dangerous men were a no-go.

And Preacher, the notorious thinks with his dick man, he was all the bad decisions a woman could ever make and a lifetime of regret all wrapped up in a six foot six rock hard package.

He didn’t get the earlier message, not from the way he moved or gazed hungrily down at her, eyes glinting. One finger reached out, he gave her enough time to reject the touch, he really did. Ruby just stood there stunned, braced to be touched by him. And when it came, a stroke down her cheekbone, subtle, barely there and over in a second she let go on the air trapped in her nervous lungs.

“Don’t you feel it, beautiful, when we touch, doesn’t it shift something in you?”

He stepped further into her space sucking all the oxygen out of the atmosphere.

“Dammit, Preacher. You can’t say that.”

“You don’t know how badly I want to fuck your mouth with mine.”

“I don’t even like you…” Weak. Lame. Lies. It was all she had to offer because she feared if given the choice right then and there she’d spend her rent money on one kiss. Just to see how good it would be.

“Then, you better throw out a protest while you can, because I’m three seconds away and you’re reaching up on your toes…”

Fuck. She was. Too late. His mouth crashed down on hers, he swallowed her gasp and took the moment of her surprise to slip his tongue inside.

After that any feeble attempt at a protest died with his amazing taste filling her mouth, corralling her in its web and enticing her to fuck his mouth back.

She did. Until she ran out of oxygen.

Preacher was a good foot taller than her, Ruby was encased by him, helped along by the grip on the top of her arms pulling her higher on her toes so he could take more of her lips, she helped sucking on his lower one until he groaned, her arms wound around his shoulders doing some of her own dragging.

Allowing herself to ride the intoxicated sensation until her blood fizzled threatening to explode like a volcano. How could she assume he wouldn’t be very good at kissing?

The man was a kissing master.

Sending her crazy. Making her crave like never before. It was a throb.

A desperate ache began in her belly, blooming outwards, reaching all corners and god, he pushed her into a wall and if it was possible he kissed her deeper, all tongue and teeth working in tandem until her body was a ball of flames controlled solely by him.

“No. Kiss me.” He groaned licking over her tongue.

She loved tongue in kissing. If it was done right and some men needed to go back to square one, what with the thrusting and the slurping. Preacher was a damn tongue maestro.

Hard. Slow. Just how she guessed he wanted to fuck her.

When they parted it was only because air had become a necessary need. His hands bracketed her neck, holding her steady, his mouth taking nips.

He invaded her mouth with a forcefulness that was completely out of line and yet she leaned into him, opened her lips and moaned the second his tongue was in contact with hers. It was an odd sensation, a stirring in her belly, like excitement and dread all mashed into one amalgamation of lust. He didn’t give her time to think before he swooped and plundered and how sexy is that, that tiny part of her that is submissive and wants to be dominated takes over, grabs his shirt and she enjoyed the kiss of the century.

It should be wrong.

He’s everything she’d avoided and should continue to swerve. She’d seen him casually screw countless women for god’s sake, recognizes clearly he’s trying to make her number nine billion in that list.

She couldn’t stop kissing him. His mouth was skilled, moving this way, that way, dipping to deepen, backing off to nibble, but always keeping strong contact. Her lips were swollen.

In any case Ruby did go on kissing him, her fingers clutched the front of his shirt, he was so damn tall her neck was almost broken with the awkward angle, his taste is explosive, strong, masculine with a hint of mint in the background, he tasted so damn good she practically purred for more of his tongue stroking hers, he laughed against her lips.

The sound sexy as hell.

Her core clenched hard enough she practically orgasmed where she stood. His fingers trailed to the base of her spine where she was sensitive, not many men knew that about her, but he seemed to hone in on that spot, drawing circles, making her melt into a feline purr against his tongue.

She’d thought kissing a man with a beard would be ghastly, not pleasant.

It was the complete opposite. He kept his goatee part of his facial hair trimmed close to the skin, and it was silky soft as though he tended to it like a garden.

The man was sexy as the devil himself.